Nutrien and EXMAR announced on July 29 that we have signed a Collaboration Agreement to jointly develop and build a low-carbon, ammonia-fueled vessel, and we’re proud to share more about ammonia’s potential to reduce carbon intensity and Nutrien’s role in this journey.

Ammonia is one of the world’s most important commodities for good reason. In many ways, ammonia is a miracle molecule. It’s primarily used to help feed billions of people around the world as a key element in fertilizers, but ammonia also keeps populations healthy in pharmaceutical applications, is a building block for plastic products essential to daily life, can be used as a refrigerant, and keeps our homes clean through a variety of products that people use every day.

The benefits of ammonia don’t stop there. It can also be used as a low-carbon fuel that can be produced, stored and shipped around the globe. Pure ammonia is composed of a single nitrogen atom bonded to three hydrogen items – it contains no carbon – so when fully combusted, the only end products are nitrogen and water vapor. With credible low- and zero-carbon pathways for ammonia production, there’s significant interest globally in using ammonia as a fuel.

Nutrien has committed to achieving a 30-percent reduction in greenhouse gas (GHG) emissions intensity by 2030. The development of low-carbon ammonia for use in agriculture, industry and as an energy source is a strategic pillar of Nutrien’s aspirations to be a leader in sustainability across the ag value chain and in emerging energy markets. Nutrien intends to use its global scale and expertise to bring this to fruition.

Ammonia is emerging as an energy source of choice for fueling the shipping industry to transition away from conventional fuels and reduce GHG emissions.

Low-carbon ammonia produced on the US Gulf Coast can be rapidly scaled to make impactful emissions reductions of up to 70% prior to 2030, which is consistent with the International Maritime Organization’s (IMO) decarbonization goals. This presents an opportunity for rapid uptake and deep decarbonization utilizing a fuel that can be produced economically today. Low-carbon ammonia can pave the way to developing a functional global supply chain, leading to the integration of zero-carbon ammonia as projects and technology for its manufacture are developed.

Nutrien’s collaboration with EXMAR to build a low-carbon-ammonia-powered vessel is an important step forward in this journey, providing a repeatable pathway for wide adoption of low-carbon ammonia as a clean fuel for the maritime industry.

In addition to the EXMAR collaboration, Nutrien is working with a number of companies to develop a better understanding of the practical realities involved in using ammonia as a fuel for ships. A joint study framework has been struck that will discuss common issues including a safety assessment of ammonia-powered ships, ammonia bunkering and fuel specifications. Going forward, the framework will seek to share opinions, expertise and experience with other ammonia producers, related international organizations, port authorities and regulators in potential bunkering countries with a shared interest in developing ships using ammonia fuels and establishing a global ammonia supply chain.

“Nutrien is positioned to supply emerging low-carbon markets in agriculture, industry or for use as a fuel. Our recently announced collaborations will leverage Nutrien’s geographical advantages, technical expertise and global scale to help move the needle on low- and zero-carbon ammonia production, reduce maritime emissions and will set the stage for a globally decarbonized ammonia supply chain in the years ahead.” – Raef Sully EVP & CEO, Nitrogen & Phosphate.

Nutrien has been shipping ammonia safely for more than three decades, having transported about 45 million tonnes of ammonia over that time across the globe -- to North America, Africa, Latin America, Europe and Asia. On average, Nutrien’s fleet of four ammonia vessels complete about 60 voyages per year. Nutrien will continue to conduct its operations and processes in a way that builds on its excellent safety record.

Nutrien has actively been pursuing the development of low-carbon ammonia for more than a decade and has approximately 1 million tonnes of production capability through its Redwater and Joffre, Alberta operations, as well as its Geismar, Louisiana facility.

Nutrien’s Geismar location has the potential to become a low-carbon ammonia hub. It uses carbon capture and sequestration technology to reduce the carbon intensity of its ammonia production, and it has tidewater access that can accommodate a wide variety of ammonia vessels including Nutrien’s existing fleet of four ammonia vessels equipped for global distribution.

Geismar has the capability to produce 200,000 tonnes of low-carbon ammonia annually, and is positioned to expand production through regional access to abundant and low-cost natural gas, a skilled workforce and world-class carbon capture and sequestration infrastructure. 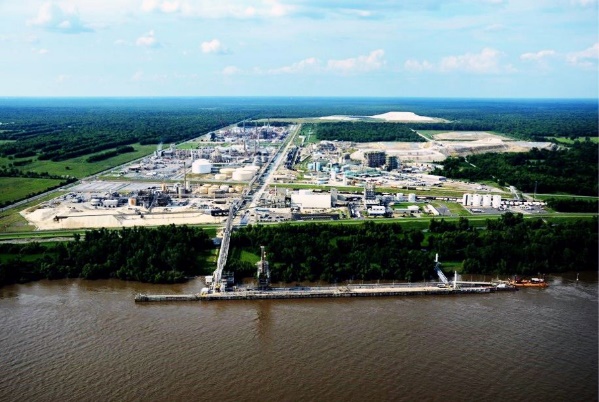 With these geographical advantages, the low-carbon ammonia produced will drive significant and meaningful emissions reductions at a competitive cost for use in agriculture, industry or emerging fuel markets.

Nutrien is actively pursuing the development of an economically viable global supply chain that meets emissions reduction targets. This includes promoting adoption of low-carbon fertilizer products to farmers around the world. Nutrien’s carbon program, launched in 2020, provides growers with end-to-end support to drive sustainable agriculture while boosting their profitability using a combination of science, technology and a carbon credit system that builds a new market around positive carbon outcomes.

The intent is to provide growers with sufficient profits to make the most sustainable fertilizer choices and enable Nutrien to be a leader in decarbonizing the fertilizer industry. Strong interest in Nutrien’s carbon program has resulted in more than 200,000 pilot acres across Canada and the US, exceeding the initial 100,000-acre target.