Parrott Family Farms has a lot of history. With seven generations of growers and roots dating back to 1842, the farm sits just outside Danville, Iowa, a one-stoplight town of some 900 residents a dozen miles west of the Mississippi River. It may have 150-plus years of storied history, but the Parrott family is bringing a fresh, young outlook to the forefront.

At the center are Matt and Deanne Parrott, who’ve called the farm home for more than 20 years. The grandson of a World War II veteran, Matt runs the operation alongside his parents and wife. After graduating from Iowa State University in 1996, he expanded the farm’s row-crop operation with specialty crops, and he’s also integrated new technology to maintain high product integrity and stewardship of resources.

As part of that journey, Matt works with partners like Nutrien, the world’s leading provider of crop inputs and services, to gain transformational guidance on sustainable farming. That aligns with the forward-looking perspective Matt and Deanne bring on environmental practices. If agriculture has entered a new race for sustainability, Parrott Family Farms is running it hard – and Nutrien is helping them on. 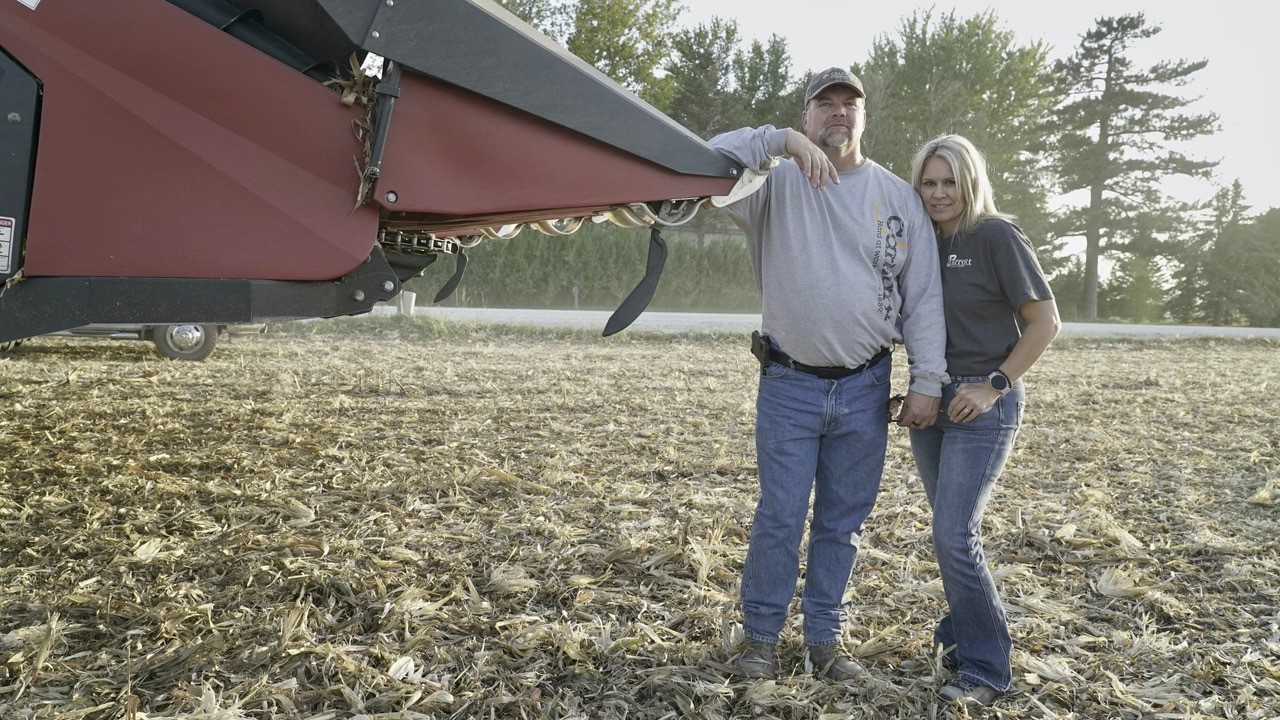 A Partnership Eight Years in the Making

Since the mid-2010s, Nutrien has played a vital role in helping Parrott Family Farms remain productive and sustainable. That’s when Justin Myers, Nutrien’s local branch manager, began working with them. Myers meets with the Parrott family quarterly, and Al Weisman, the farm’s crop consultant and regional seed lead for Nutrien, checks in about every other week.

“We do a lot of applications with fertilizer, and we get a lot of feedback from Al on our seed selections and production,” Deanne says. “It’s been a productive partnership so far.”

The Parrott family are among the 500,000 growers who partner with Nutrien and receive some 27 million tons of products for agriculture, industrial and feed usage. For Parrott Family Farms, Nutrien helps their soybean and corn production. And Iowa corn is critical this year, as drought-impacted crops in the U.S. west have turned eyes toward the state that regularly produces nearly one-fifth of the nation’s corn.

It's no surprise that climate change is playing a big role in the lower yields. A recent Bloomberg report quoted crop consultants as saying the fields have been “underwhelming,” “disappointing” and “just not great” amid an unseasonably hot, dry summer for the Hawkeye State. That makes sustainable agriculture all the more important. Global crop production and land use accounts for 17% of greenhouse-gas emissions, according to United Nations data.

The Parrott family needed little convincing to get on board.

“We’ve been focused on sustainability practices for many years,” Matt says. “It’s becoming almost a precedent at this point. We're trying to get ahead of it as much as we can here, and because it obviously takes team effort with Nutrien. It’s definitely a learning curve to help us achieve that goal. The more we can learn, the more we can set some goals further out. The features are so wide-open on this that we can’t imagine what this will look like 20 years from now. We just want to be staying ahead of it, like anything else in business.”

That dovetails with Nutrien’s own goals, as the company aims to help implement 75 million acres of sustainable and productive agricultural products and practices worldwide by 2030. A couple years ago, Nutrien launched its pilot carbon program, which offers growers financial incentives for positive, measurable performance around sustainable farming practices that reduce GHG emissions and sequester carbon in the soil. The program also helps growers understand the resulting improvements in financial, productivity and environmental performance. It’s now scaling that out, with growers like the Parrotts at the forefront.

The sustainable practices they’ve adopted include reduced tilling, as well as the usage of nitrogen stabilizer products. However, Matt sees long-term returns several growing seasons out as more important – and better-yielding – than short-term gains. That makes the Parrotts something of an early adopter in their community for sustainability.

“I wouldn’t say most farmers push sustainability around here,” Matt says. “It’s not that they do a bad job necessarily, but it's not something they really worry about.”

“As far as our growers wanting to get involved in the level that Matt and Deanne are, that’s been a very hard talking point for us as crop consultants and managers,” he says. “Growers like Matt and Deanne are a low percentage of our customer base but a higher percentage of our acres, because the customers adopting early practices are the ones that are also growing the most.”

Partnerships Fuel Programs, Not the Other Way Around

Amid a spate of new carbon programs available to growers across the country, Nutrien has but one of many. Awareness should increase even more: The recently signed Inflation Reduction Act gives another $8.45 billion to the Environmental Quality Incentives Program, which similarly pays growers to adopt conservation practices.

To the Parrott family, Nutrien’s program is an outgrowth of its partnership – not the other way around.

“We felt like Nutrien’s take on it was a little bit different than some of the other 10 or 15 programs going on now,” Matt says. “Some of them just seem they’re trying to check boxes and get acres and pay growers a little bit. Nutrien seemed more like a partnership versus a one-sided program that’s maybe not geared towards a grower. They’re more about wanting to learn the metrics – what the numbers look like and setting a baseline. Some of the other programs we looked at just seemed like a lot of pie-in-the-sky numbers, as if they didn’t really know what they’re doing.”

That’s kind the whole point, Myers says. Nutrien teams with growers to get feedback and learn better ways to administer it.

“Nutrien really wants to learn,” Myers says. “We came in here and said we can partner with you and learn, not necessarily just to give you a buck for a carbon credit. We're going to learn more about your farm and get it right before saying we know it all. I’m proud that’s the way we’re doing it.”