For many people, weather is the ultimate small-talk topic. But for the farmers who feed the world, weather is huge – it can be the difference between a bumper crop and a total loss – so weather talk is anything but small. And Eric Snodgrass, Nutrien’s Principal Atmospheric Scientist – is proud to be an important voice in that conversation.

“I’ve been in atmospheric sciences for about 20 years now, and along the way I’ve developed a reputation of being able to explain weather in a way that makes it digestible and actionable,” Eric explains. “I wake up very early every day – and most mornings I don't even need an alarm clock – because it's engaging to look at a new pattern and try to figure out where it's going, and to share that prediction with the people who need it the most.” 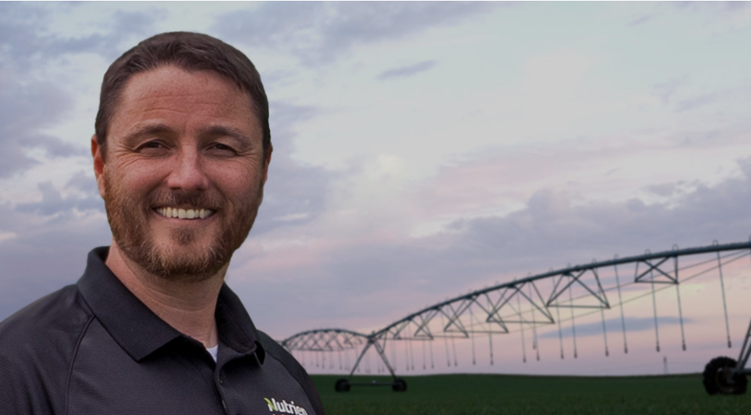 Growing up in Central Illinois, Eric didn’t feel a powerful draw to become a meteorologist – he was simply fascinated with applied physics and math, and decided to give the field a try when he started college, because he didn’t have a better idea.

“I was terrible at mathematics and physics coming out of high school, but I had some great teachers who gave me a real appreciation for it,” he recalls. “When I got into college and started taking meteorology courses. I got lucky and I picked right: I ended up loving it, and I’m still fascinated by it to this day.”

He spent most of his career in academics, but along the way he leveraged his research to start a company that became Agrible – a Champaign, Illinois-based, high- tech agronomic forecasting business that Nutrien acquired in 2018. A few months later, Eric was invited to join Nutrien as Science Fellow and Principal Atmospheric Scientist – and the rest is history.

"Part of my role is to educate"

From the radio to the internet, up-to-date weather information is easier to find today than it’s ever been – and yet, Eric’s videos, social content and speaking engagements are only gaining in popularity. Why does he have such a strong following?

“I think mainly what I bring is an invitation to the growers to come alongside me in the forecast,” he says. “Rather than a deterministic answer – you're going to get this, this and this, and we're not going to tell you why – part of my role is to educate, so if tomorrow you want to look at it on your own, you can.”

In addition to the forecasts Eric shares with the world, he provides a tremendous amount of content to the Nutrien Ag Solutions sales teams, so they can pass it onto their customers as part of the suite of services and solutions they provide.

Eric has also built a prototype website to harness and leverage his ag-focused, education-driven forecasting approach, and he and the Digital Services team are working on integrating it into the Nutrien Ag Solutions Digital Hub and related applications.

"A new puzzle every day"

Still based in Champaign, Eric is a happily married father of two who enjoys boating and loves coaching his son’s soccer team and daughter’s science Olympiad team. Another passion is restoring antique cars.

“If I were independently wealthy, would I still be forecasting the weather? Probably, but I'd also spend a lot of time in my garage working on my cars,” he says. “I get a kick out of building things – whether it’s wrenching on a car in my garage or wrenching on a computer to make new maps and to do new analysis.”

Although meteorology is obviously a discipline focused on the skies, it’s also a profession that forces you to stay grounded, Eric says – the atmosphere is extremely complex and difficult to predict.

“One of the things that I love about this job is that it’s a new puzzle every day – and every time I think I’ve got four or five pieces of the puzzle lined up, the puzzle changes. If you start getting cocky, the atmosphere will humble you the very next day,” he says. “Meteorology is really young as a field of scientific study, and we’re still learning. As that continues, and as computers get faster and smarter, we’re only going to get better at this. Some people talk about being past their peak in their profession, but the best I’ll ever be at forecasting the weather will be the day I retire. I find that really encouraging.”