Nutrien prides itself on a being a good neighbor. That goes for its wildlife neighbors, too.

Nutrien’s White Springs facility in northern Florida is home to much more than phosphate mining operations; we share the land with a rich array of flora and fauna. One such species is the gopher tortoise, which thrives in the site’s sandy soils that make it ideal for digging burrows to protect tortoises from predators and extreme weather. These industrious reptiles also appreciate the site’s wide variety of low-growing plants from which they can forage, as well as its open areas for nesting and basking in the sun.

As White Springs’ operations have expanded, so too has the need to protect its wildlife neighbors. For several years, the site’s environment team has been working alongside state officials in relocating gopher tortoises to a protected onsite location – a reclaimed phosphate mine that’s ideally suited to their habitat preferences. Mike Batts, Environmental Supervisor at White Springs, recently took the program a step further by becoming certified as an authorized agent to handle relocations in house, ensuring these tortoises can be moved safely and set up to thrive over their 40- to 60-year lifespan.

Check out this video with Mike Batts explaining our work in helping gopher tortoises. We’d like to thank our friends at Florida Gateway College who shot and produced this video for us.

“I’ve been studying these fascinating creatures for years and I’m still learning new things about them,” says Mike. “I find this work to be incredibly rewarding and there’s a passion among our people to do what’s right for the environment. The work we’re doing will have a positive, lasting impact and shows that small actions can make a big difference when it comes to sustainability.”

The gopher tortoise, which can grow to up to 16 inches (41 centimeters) long, and weigh up to 13 pounds (6 kilograms), is a threatened species, and numerous regulations from Florida’s Fish and Wildlife Conservation Commission (FWC) must be followed while surveying, handling and relocating the burrow-loving reptile. “It begins with obtaining an FWC relocation permit before the burrows are touched or construction activities begin,” says Mike. “But the ultimate goal is to restore and maintain populations of gopher tortoises so the species no longer warrants listing as a threatened species.”

Under a perpetual conservation easement, White Springs has a fenced recipient site that’s currently permitted to accommodate 44 tortoises. With about 18 tortoises already, Mike wants to get ahead of the curve and ensure the program is set up for long-term success. Nutrien is working closely with FWC, conducting analyses and developing recommendations for ongoing habitat improvement. 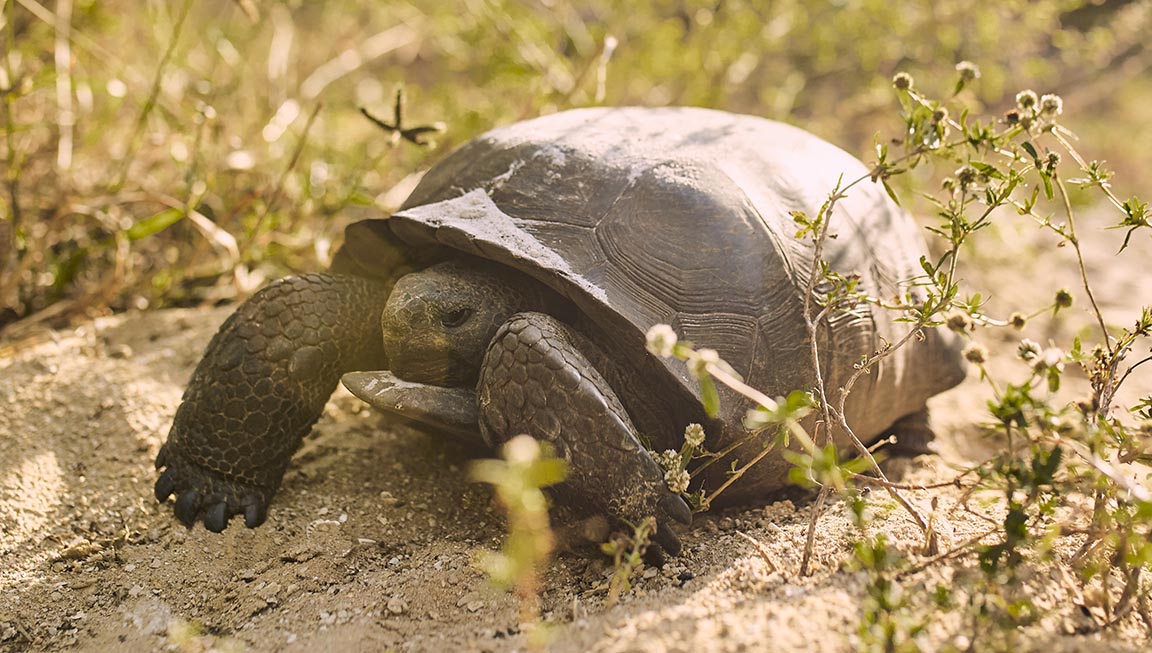 “We’re working with the FWC in the hopes of accommodating 80 tortoises on the 58-acre recipient site. This could include taking in gopher tortoises from other Nutrien facilities as well as other companies if approved by the State of Florida,” says Mike.

The docile gopher tortoise is known as a keystone species because its members alter their environment in a way that benefits other species. Their burrows serve as a refuge for other animals including snakes, rabbits, gopher frogs, and invertebrates. “We use special cameras to scope out the burrows and see what other species might be sharing that space with the tortoises. We may see indigo snakes, and when we do, we coordinate with FWC and the US Fish and Wildlife Service before relocating them to suitable habitat as well,” says Mike.

The relocation program is a hit among the White Springs team, including Mike Dirham, Vice President of Phosphate Operations at Nutrien. “To continue to feed a growing world, we support nature-positive solutions and sustainable practices across our sites, operations and communities. Protecting wildlife is a key part of that. This program is a tangible example of our commitment and will set tortoises up to thrive and reproduce within a protected environment,” he says. “It’s a sustainable solution for a threatened species that our team is proud to continue advancing.”