Reclamation project gets a bee-eautiful addition

Our reclaimed phosphogypsum stack in Alberta is buzzing with activity, thanks to the recent arrival of two honeybee hives.

The reclaimed phosphogypsum stack at Nutrien’s Fort Saskatchewan, Alberta, Canada nitrogen facility got some new residents recently, and the buzz is that they’re a great addition to the neighborhood.

A few thousand honeybees are settling into their new digs in two Nutrien-branded bee boxes installed atop the gypstack, thanks to Environment Specialist Dr. Connie Nichol and Plant Operator Shane Fairchild, who is a beekeeper in his spare time. 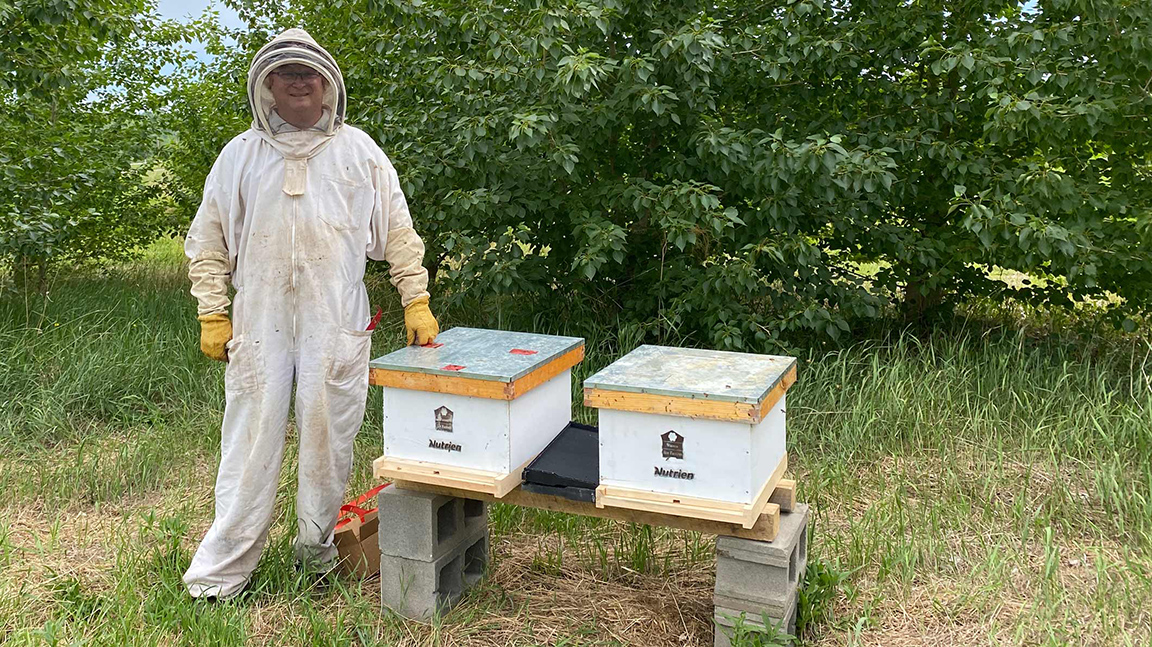 “We’ve reclaimed half of the gypstacks here at Fort Saskatchewan and in the last few years we’ve established healthy ecosystems with a variety of trees, grasses, shrubs and a large vegetable garden-pumpkin patch,” Connie explains. “Last year I came to work and saw a honeybee swarm in the garden. I found a local beekeeper to rescue the swarm.”

At about the same time, she noticed a story on our intranet about a swarm rescue at our Redwater, Alberta facility, which talked about how a Fort Saskatchewan plant operator named Shane Fairchild – who is a beekeeper in his spare time – had rescued a swarm of honeybees from the Redwater nitrogen site – located 31 kilometers (20 miles) from Fort Saskatchewan.

“I thought this would be a great opportunity to further enhance biodiversity since we had bees at our site, and Shane did, too,” Connie says.

Operation Honeybee officially took flight in June, when Shane installed the bee boxes on site. “This is a great spot for bees,” Shane says. “It’s close to the North Saskatchewan River valley and neighboring farmer fields, and the stack itself is rich with clover, raspberries, gourds, and other nectar and pollen-rich plants that bees love.”

The plan is to sell the honey from the two new bee boxes to employees, and donate the proceeds to a local charity. “At Fort Saskatchewan, there could be up to 400 pounds of honey bottled by October,” says Shane. “Talk about a sweet summer!”

He’s optimistic the site could host many more hives – perhaps up to 100, with each hive’s population fluctuating between 20,000 and 80,000 depending on the time of year.

“The forest-garden project is a real point of pride for our site, and the honeybees are a great addition,” says Ted Sawchuk, Fort Saskatchewan General Manager. “Thanks and kudos to Connie and her team, and to Shane for their commitment to the environment and to Nutrien.”

Phosphogypsum is a powdery byproduct of the phosphate fertilizer production process. Piles of the material, known as gypstacks, are found at phosphate sites worldwide, including Nutrien’s. We don’t make phosphate fertilizer at Fort Saskatchewan, but a previous owner of the location did – so Nutrien took responsibility for the remediation of the gypstacks when we acquired them.

In 2005, Connie began partnering with the University of Alberta to explore better ways to close and reclaim the gypstacks. She started by growing grass, which is standard practice – but in 2014, Tim Keddy, Wood Fibre Development Specialist with the Canadian Wood Fibre Centre (CWFC), visited the site and had an idea: Why not grow trees instead? Trees are just as good at preventing erosion and seepage, require less maintenance, sequester more carbon and at the end of their life cycle, can be harvested for biomass or wood chips.

From 2015-2020, Nutrien and CWFC worked together to establish 27,000 trees on 19 hectares (47 acres) of closed gypstacks, and the trees are thriving. Connie has also established a 22,000-square-foot garden on the site, where she grows a variety of vegetables, flowers and berries.
She and her partners with the university and CFWC are encouraged by the thriving forest and garden, and they’re not the only ones: Connie has recently been invited to give presentations on the project by the International Fertilizer Association, International Atomic Energy Association and the Western Nutrient Management Conference. The project has also been nominated for provincial- and federal-level environmental awards, and been featured in numerous publications, including Fertilizer International magazine and the Canadian Forest Service newsletter.

“Nutrien is committed to responsible, proactive and innovative environmental stewardship, and the gypstack reclamation project at Fort Saskatchewan is a great example of that commitment in action,” says Raef Sully, Executive Vice President and CEO of Nitrogen & Phosphate for Nutrien. “We’ll continue to monitor and assess this project, and in the years to come, we’ll look for opportunities to apply this model elsewhere at Nutrien and beyond.”

The aerial photos taken in 2015 (left) and 2020 (right) provide a sense of how afforestation has transformed the Fort Saskatchewan phosphogypsum stack.